The Wilds Wiki
Register
Don't have an account?
Sign In
Advertisement
in: Characters, Main Characters, Females,
and 2 more

Marty, Marty B (by Toni), Subject #5 (in the Dawn of Eve experiment)

Martha Blackburn is one of the main characters in The Wilds. She is portrayed by Jenna Clause.

She is an animal lover with a big heart and a deep connection to her Native American heritage (proud member of the Ojibwe tribe). Martha’s sweet and optimistic nature belies the struggles of her past. On the island, Martha faces challenges that forces her out of her shell [1].

Martha grew up in Minnesota along with her best friend Toni, who she has been best friends with since they were little. When she was still a child, she got injured due to jumping on a trampoline, most likely a spinal cord injury with paralysis due to the back brace she's shown wearing. She had to attend physical therapy and relearn to walk and dance again. Martha has an interest in dancing, particularly the jingle dance, which is a native dance from her culture.

En route to the Dawn of Eve retreat in Hawaii, Martha and eight other girls are stranded on a remote island when their plane crashes

Martha is a very optimistic, kind girl who is sweet to everyone, both humans and animals. She is proud of her heritage and makes friends with others easily. She tries to see the best from everyone and every situation, but while this helps her to be liked by others, her mother and Toni suspect that this overly positive attitude comes from Martha's need to deny the horrible things she suffered when she was sexually abused by her physical therapist.

Martha has medium length brown hair with some purple strands. She has brown eyes and tan skin.

Toni is a best friend of Martha's. It's unknown how long or when their friendship began, but throughout the series it's shown that their bond is strong, seeing how Martha is accepting of Toni's sexuality and helps her in multiple situations, like how she offers Toni to stay in her house after she and Regan broke up. Toni is seen to be a supporter of Martha's jingle dancing, showing up on both her practice session and the actual day of the competition. Toni is there for Martha throughout the entire time that Dr. Theodore Wolchak, her physical therapist, is accused and eventually arrested for child endangerment and sexual assault. This is shown when she comforts Martha upon finding her sobbing in bed.

While stranded on the island, their friendship is tested with how Martha becomes friendly with Shelby, making Toni jealous. During the shelter building contest, Toni loses her temper and ends up destroying the shelter her team had built. This ends up temporarily breaking their friendship, with Martha stating that she can no longer pick up after Toni.

Throughout the next few episodes in the series, the two barely talk, though it's clear that they still care deeply for each other. This is most especially shown on their twelfth day on the island, when Martha defends Toni from Shelby's homophobia and when they both tend to each other while being sick due to the mussels. As the days pass by on the island, they gradually spend more time with each other again, and although there's never a scene for it, they go back to being best friends.

Martha meets Shelby when the latter suggests an icebreaker to the rest of the girls on the plane. Once Shelby introduces herself to Martha and compliments her eyes, the two hit it off right away.

While on the island after their plane crashes, Shelby helps Martha when she is nearly taken away by the waves and helps her with her injured ankle. While Martha's ankle is healing, Shelby continues to assist her and give her moral support, making them grow closer. Their continued blossoming friendship makes Toni upset, especially during the shelter building competition wherein Martha sides with Shelby and works together with her.

On their twelfth day on the island, while the girls are eating mussels, Toni calls Shelby out for the homophobic energy she's giving. Martha is shocked at this and tells Toni that it isn't true, not believing that Shelby actually thinks that way, but Shelby becomes honest with the group and says that she believes that way of life is a sin. This results in their friendship being in a rocky state for the next few days. Eventually, they make up, and in Season 2 she learns about Shelby and Toni's relationship. She is very accepting of this, helping to make up a bed they can share.

Martha: "I'd rather be changed by something good... like love."
-- in Day Six

Martha (to Rachel, who's in the quicksand): "Listen to me. You have to stop, okay? Shh, stop fighting. You'll see. Everything gets easier. Just let go, and let us help you, okay?"
-- in Day Seven

Leah: "Okay, I really think we need to do something."
Martha: "Don't get involved. When me and my sisters fight, it's to the death."
-- in Day Fifteen 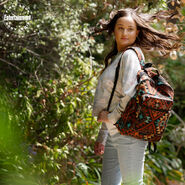 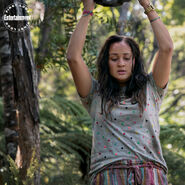 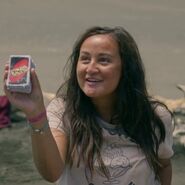