A sudden illness rips through the beach camp, affecting nearly every castaway. As the girls fight for survival, we learn more about Leah's past and how she’s been faring since her rescue.

Leah takes up journaling at Nora's suggestion. Rachel brings a bag full of mussels back to camp, much to the girls' delight. Shelby has to sit out because she's allergic to shellfish. Toni pretends to eat the shellfish the way one would perform cunnilingus on a woman. This upsets Shelby because of its "pornographic" nature, but Toni calls her out on her homophobia and leaves. Shelby seeks comfort from Martha, who tells her that she can't think that way. Martha pukes in the middle of her speech and Shelby runs back to the group to find that all of the other girls are retching as well.

Gretchen is still at the psych ward. Alex calls to tell her that the girls have come down with some sort of food-borne pathogen. Gretchen tries to go back to work but isn't allowed to leave, as the doctor has left and she signed a form saying that she could be held for 24 hours. Gretchen still tries to leave and is restrained.

Leah goes after the pilot's bag, which has antibiotics and other supplies. While out there, she sees Shelby sneaking off by herself and follows her. Leah leaves the bag on a tree, but it falls on the ground as soon as she walks away. When Leah returns, the pills have been strewn across the ground.

Dot searches through the pilot's bag looking for the two Halophen pills. Leah lies and says that she doesn't know why the bag is full of dirt. She can only find one, and they decide to give it to Toni instead of Martha, though they are both pretty bad off. Toni refuses to take it until Shelby gets on top of her, pinches her nose closed, and forces the pill into her mouth.

That night, someone notices that Martha is pretty sweaty, and she leaves the group to cool off, but ends up passing out.

In a hospital flashback after the car accident, Leah's mom tries to talk to her and offers her some Takis. Leah is unresponsive. She has only suffered a broken rib and some bruising, according to the doctor, and offers to request a psych consult after her mom expresses concern over Leah's behavior over the last few months.

The girls try to figure out what to do about Martha, searching the bag for the other Halophen. Toni is upset that they gave her the only Halophen when Martha has people that care about her and a life, but Toni doesn't have anyone and doesn't matter. Leah admits that she dropped the bag and she probably spilled some. Dot is pissed and shoves her, saying that she needs to take her to the spot she dropped it now, and makes a torch to take with them.

Gretchen tells the doctor, Daniel, that she slept like a baby and that taking some time away was helpful, expressing her issues at work and admitting that she lost someone recently that helped her with her research, likely meaning Jeanette Dao. The doctor points out that she's being dishonest with him and says that until she is more straightforward with him, he can't help her. Gretchen says that she knew he was good when she vetted him, but didn't think he was that good. She rattles off his accomplishments and asks him to join her in her initiative. She offers him a job with them.

Gretchen praises Daniel for how he manipulated Leah in her room, causing her to need to be sedated. Daniel reminds her that the goal of this is to make the girls feel guilty about what happened on the island so that they are less likely to expose them.

In her room in the facility, Leah lies on her bed and sings "Ghost in You" by Robin Hitchcock to herself. 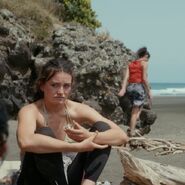